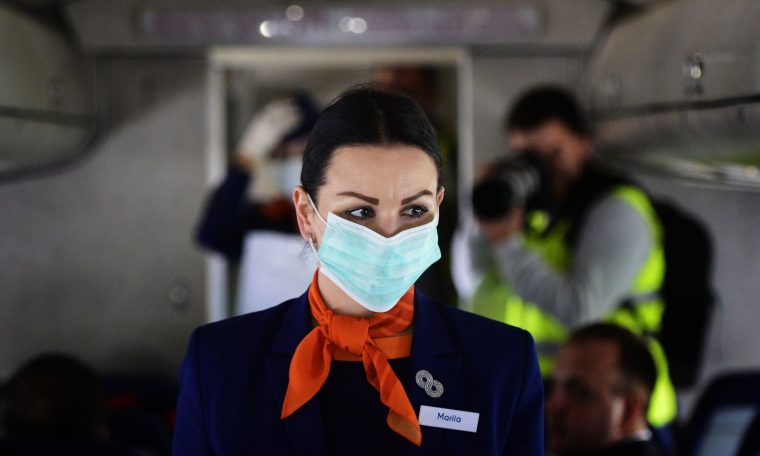 The nation’s largest flight attendants union called for a stop to all leisure travel as the death toll from the novel coronavirus pandemic rises and airlines leave workers exposed.

On a Monday morning call with reporters, Sara Nelson, the powerful head of the Association of Flight Attendants-CWA, said at least one flight attendant had died and more than 100 flight attendants had tested positive for the virus so far. Nearly 1,000 were self-quarantined and several more were in intensive care.

She urged the Department of Transportation and the Federal Aviation Administration to issue advisories to the public to postpone any non-necessary voyages until the spread of COVID-19, the deadly respiratory disease caused by the new virus, is under control.

“Unfortunately as they’re going to work they are being exposed,” he said.

The dramatic plea to cease air travel came as airline unions scramble to protect workers vulnerable to both the virus and its economic fallout as passenger carriers face a devastating collapse of travel demand.

Airlines started laying off workers as the number of confirmed cases in the U.S. surged in the middle of last month. Congress approved $50 billion in loans and direct aid to prop up the industry under its $2.2 trillion emergency relief package. But the top Democrats in Congress worried last week that the money wasn’t reaching airlines quickly enough, and urged Treasury Secretary Steven Mnuchin in a letter to speed up dispersals.

Customers and workers paid the price in the meantime. Fliers complained that airlines were automatically canceling flights, forcing would-be travelers to exchange tickets for credit at a moment when most cannot possibly plan a new trip and want refunds instead. Workers, meanwhile, struggled to find out when the colleagues with whom they flew for hours in tight quarters, breathing recirculated air, tested positive for COVID-19.

“We’ve had personal protective equipment issues and supply chain issues, where our airlines are actually not able to get the supplies to get on our planes,” Nelson said.

Airline workers warned of a lack of protective gear and protocols at the beginning of March. Two weeks later, an American Airlines pilot in Texas tested positive for the coronavirus. Bleeding cash and selling tickets for rock-bottom prices just to maintain air routes, carriers kept business as usual as it could be, treating crews “like sheep for slaughter,” one American Airlines flight attendant put it to Mother Jones.

As flight attendants took unpaid leave and booked hotels at their own expense to avoid infecting loved ones at home, a Delta Air Lines executive told pilots not to inform flight crews if they tested positive, horrifying colleagues, HuffPost reported last Friday. Delta’s pilot union reported at least 50 air captains tested positive, though union leaders said in private last week that “quite a few more” exhibited symptoms but did not receive testing.

Extra protections promised by public officials failed to appear. After cruise ships docked in Florida late last week, Gov. Ron DeSantis (R) said their more than 1,200 passengers would travel home on “chartered flights.” But one passenger told Miami’s WPLG TV station that he flew Delta home to New Jersey, and a flight attendant with knowledge of the flight confirmed to HuffPost that crews were expected to work.

Even with a federal bailout more than triple the size of the last big aid package Congress gave airlines in 2001, the industry looks likely to shrink. Department of Transportation data show U.S. airlines’ revenue totaled $64.4 billion from April through June of last year. Salaries and benefits cost the industry $35.2 billion in the six months from April to September of 2019, CNN reported. Congress, meanwhile, budgeted just $25 billion for direct cash assistance during the crisis.

Absent a fast recovery, United Airlines CEO Oscar Munoz wrote in a memo to employees last month that “our airline and our workforce will have to be smaller than it is today.”

A HuffPost Guide To Coronavirus