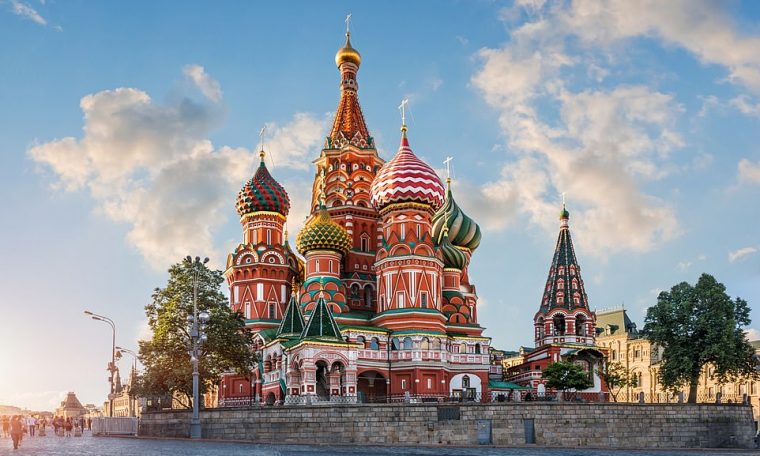 As I gazed at its showpiece gilt peacock clock, created by 18th Century English master craftsman James Cox, I was transported back to the days of Russia’s renowned Empress Catherine the Great.

The clock was given to Catherine II by her lover Prince Grigory Potemkin and has become a symbol of the decadence of the era, when the monarch presided over a licentious and avaricious court.

It was in that room – destroyed by fire after her death but since renovated – that Catherine invited her closest friends, known as ‘Hermits’, to join her at mosaic tables for card games.

‘Catherine loved gambling,’ explained our guide. ‘That’s why there are so many tables. But she was very choosy in inviting people here, so only a few were aware of her secret passion.

‘She never played for money, she played for diamonds. And they were not just any diamonds but pure water diamonds, the best.’ The expression water diamonds dates back to medieval times when jewellers would drop a diamond into a glass of water to see if they could see any flaws.

‘The players would sit around the table, the bowl with diamonds would be in the centre, and the winner would get a few diamonds,’ our guide continued. ‘At the end of the game, whatever was left in the bowl would be shared equally. So even when you lost, you won.’ 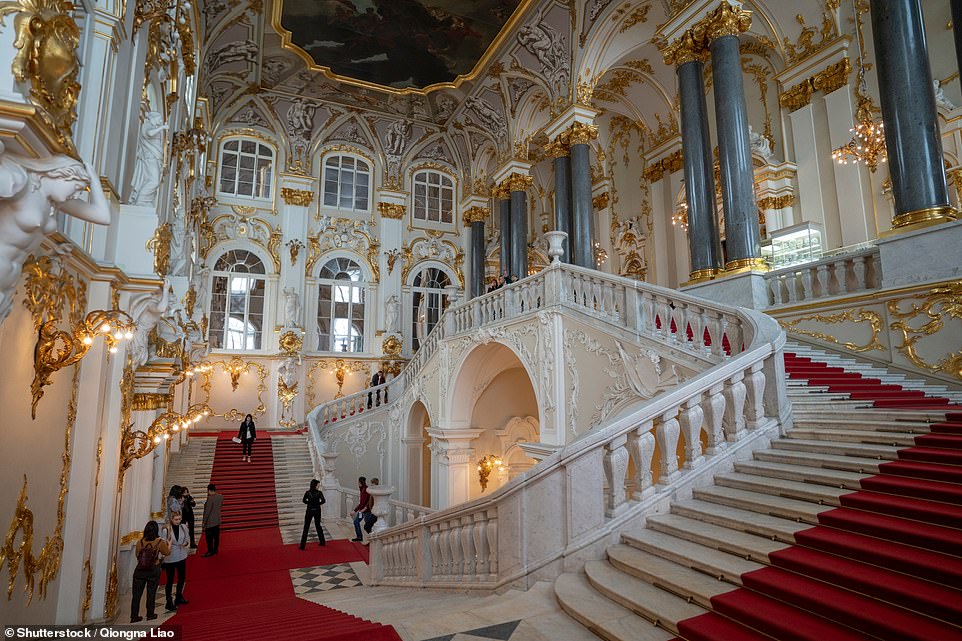 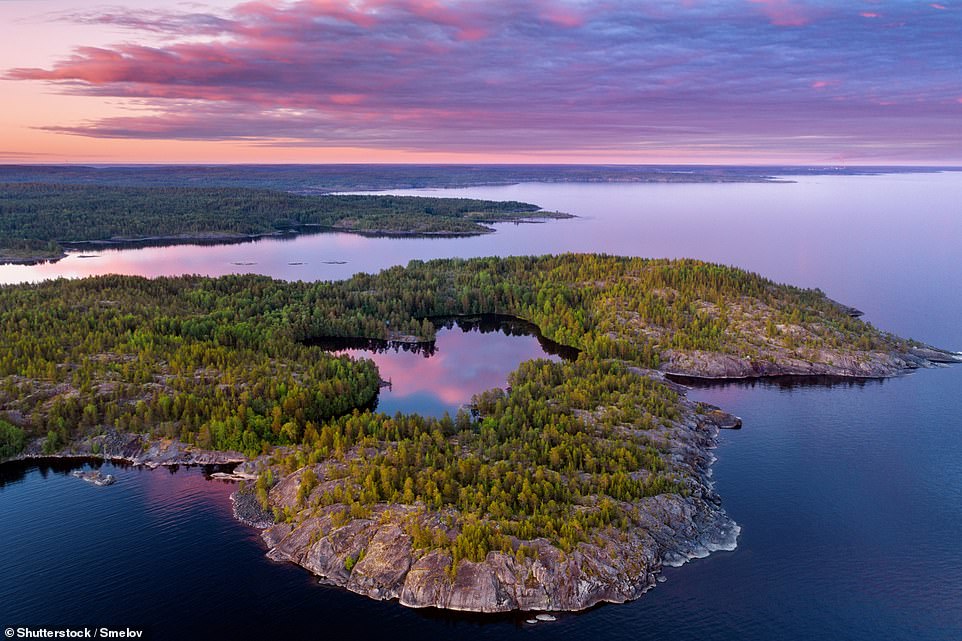 Claudia’s ship went through 17 locks – ‘the scariest was 58ft wide, barely 3ft more than the ship’ – and crossed the largest lake in Europe, Lake Ladoga (pictured)

So I was following in illustrious footsteps when I walked through the hallowed halls of the famous Winter Palace and Hermitage art galleries, overlooking the River Neva, which have become the legacy of the woman who ruled Russia for 34 years and became its most prolific art collector. She sent emissaries across Europe to scout for artworks for what is now the second-largest museum in the world. ‘As far as art is concerned, I’m not an amateur, I am a glutton,’ she once said.

The Hermitage was one of the highlights of my trip to Russia on Viking Akun.

I was one of 204 passengers on Viking’s 13-day trip along the Waterways Of The Tsars, which sails from Moscow to St Petersburg, and I could not wait to find out more about the woman, played by Helen Mirren in the forthcoming Sky mini-series Catherine The Great.

‘I am very excited to embody a woman from history who grabbed and then wielded great power,’ the actress has said. ‘She rewrote the rules of governance by a woman.’ 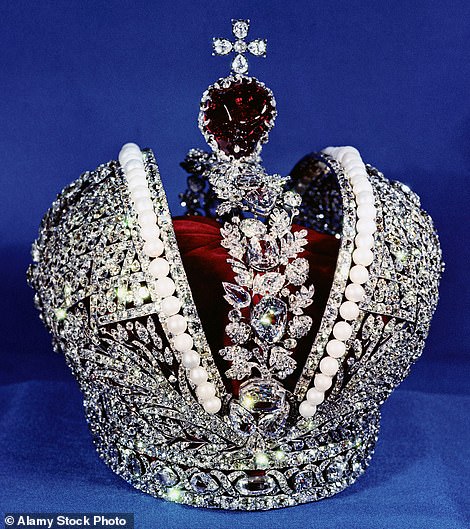 Our cruise began in Moscow, a city described by my guide as ‘an architectural salad of styles’. It did not disappoint. Not only did I visit Red Square, home to Lenin’s Mausoleum, travel on the Metro (one of the most beautiful in the world) and to the GUM shopping mall (as opulent as Fortnum & Mason) but I dined at the Grand Cafe Dr Zhivago, a gastronomic hotspot – the crab dumplings, mushroom pierogi and chicken Kiev were exquisite.

However, no trip to Moscow would be complete without a visit to the Kremlin’s Armoury, which houses Russia’s Imperial Crown: it is a must for fans of the Tower of London’s Crown Jewels.

First used by Catherine the Great at her coronation, the crown was worn by every Emperor until Nicholas II, the cousin of King George V, who was executed by the Bolsheviks in 1918.

But, although the jewels were spectacular, it was the fashion which caught my eye – the museum contains Catherine’s wedding dress and her coronation gown, both of which I coveted – although it was pointed out that they would be unlikely to fit me.

‘When she came to Russia [she was born in what is now Germany] she was only 15 years old,’ said my guide, ‘and her waist was 18in. But she loved living in Russia and really enjoyed her food. By the time of the coronation, her waistline had expanded.’

You cannot fail to put on weight on a Viking cruise and by the time I stepped off the ship 13 days later, I was as rotund as the late empress, who lived on beluga sturgeon, sautéed cuckoo, nightingale tongue, elk lips and hedgehog liver. 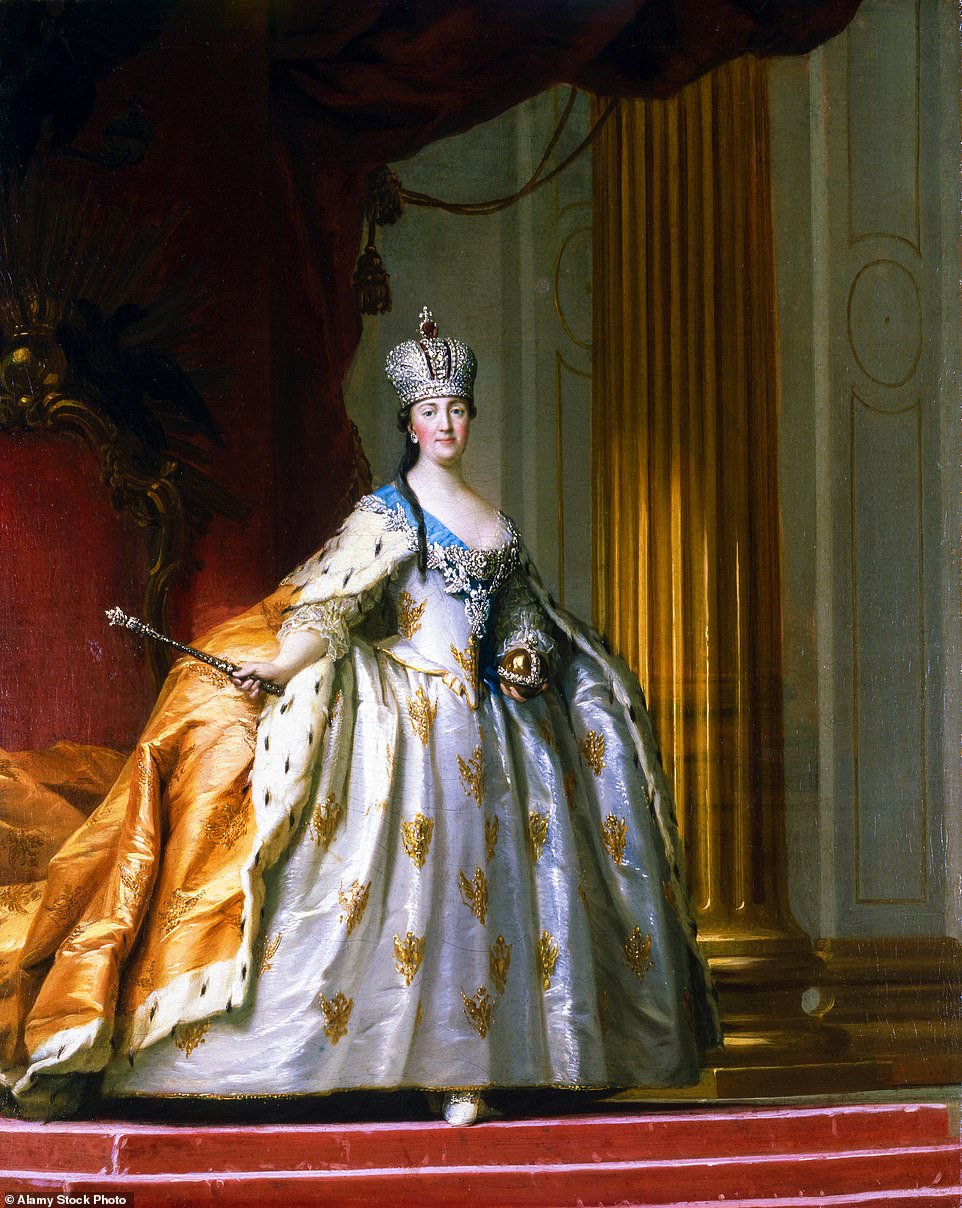 A forthcoming Sky miniseries will focus on Catherine the Great, pictured here in her coronation robes

I could not find any of those 18th Century delicacies on Viking Akun, but I worked up quite an appetite as we wound our way from Moscow to St Petersburg, stopping off at villages along the way. As well as sampling the buffet and three-course lunch and dinner menus, I tasted many Russian specialities such as borscht soup (a beef broth with beets, carrots and sour cream), stolichni (salted herring) salad, mushroom blinis with a truffle cream sauce, salmon gravlax and beef stroganoff. I even learned to make pelmeni dumplings with the obligatory smetana sour cream.

Needless to say, we had many a glass of vodka and the drinking toast ‘nostrovia’ rang out daily in one of the ship’s two bars.

So, with a glass in hand, I gazed out of the window as we sailed 1,100 miles along the Moscow Canal, down the Volga River and into the Volga-Baltic Canal.

We went through 17 locks – the scariest was 58ft wide, barely 3ft more than the ship – sailed past belfries and churches, and crossed the largest lake in Europe, Lake Ladoga.

But it was the Cathedral of Our Saviour’s Transformation that I found most surprising with its nudes of Adam and Eve on the walls.

‘This church was built during the reign of Catherine II where liberty came everywhere,’ said our guide.

Finally we arrived in St Petersburg. There I joined Viking’s ‘privileged access tour’ of The Hermitage Behind Closed Doors, which included a visit to the palace, before it opened to the masses, and a tour of the storage facilities, which houses the Hermitage’s ‘most beautiful’ works of art.

Who says that gluttony doesn’t pay?

Viking’s 13-day Waterway Of The Tsars cruise, which includes flights from the UK and ten guided tours, starts from £2,795pp. To make a reservation or for more information, go to vikingcruises.co.uk.

A bountiful beauty: Exploring the little Caribbean island of Bequia in St Vincent and the Grenadines