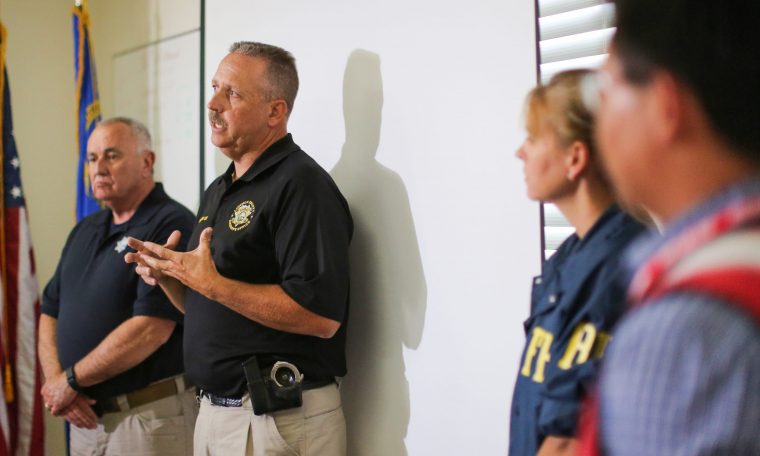 But no one really knows how many will show.

Not Matty Roberts, the college kid whose middle-of-the-night internet joke unexpectedly tapped into the Area 51 zeitgeist and enticed the curious minds of millions.

Not Connie West, the rural innkeeper at the Little Al’e’inn in the Exterrestrial Highway town of Rachel, where Alienstock is set to unfold.

‘Storm Area 51’ off?  Organizer bails on Alienstock, will throw party in Las Vegas instead 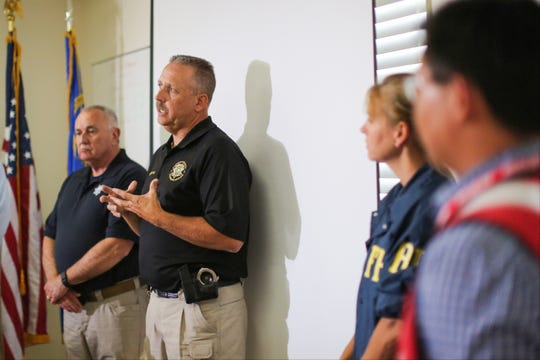 Lincoln County Sheriff Kerry Lee, center, and Director of the Nevada Department of Public Safety James Wright, left, hold a briefing about a Wednesday night bombing that killed one person in Panaca, Nev., on Thursday, July 14, 2016. Lee told the USA Today Network on Thursday, September 12, 2019 that he was unsure of what to expect at the “Alienstock” festival planned for Rachel later this month, but that his team will be ready. (Photo: Brett Le Blanc, AP)

Not even Lincoln County Sheriff Kerry Lee, the top cop responsible for making sure law enforcement is ready for this … encounter.

“We just don’t have a clue,” he told the USA TODAY Network. “I don’t think anybody else truly in their right mind would have any idea.”

The unknown presides, and it’s a specter Sheriff Lee rarely faces out in rural Nevada. But he says his deputies are ready for whatever comes.

Here’s a look at the highlights of an interview he granted Thursday to the USA TODAY Network.

How many people do you think will show up to Rachel?

Do you feel prepared?

Regardless of whether the event takes off or not, we’re still moving forward. We’re prepared for whatever comes our way.

What about all the last-minute changes that led up to the event?

What role will the sheriff’s office play this weekend?

No. 1 is the safety of the people that are coming. That’s our No. 1 priority. No. 2: We’ll be at the gates or near the boundaries of the Nevada Test and Training Range watching for people who attempt or who trespass onto the property. And once they’re apprehended by NTTR security, we’ll take those people into custody, and they’ll be transported out and booked accordingly. That’s our role. Fire is going to be watching for people’s campfires and doing the fire thing. EMS is going to be watching for people throughout the desert. We’re going to assist NTTR with boundary security issues they might have.

MORE: Here’s why the ‘Storm Area 51’ organizer sent a letter to a Nevada innkeeper

What happens if someone crosses the boundary to storm Area 51?

How many deputies will be a part of the operation?

There will be 350 or more first responders – and about 150 law enforcement officers.

Is this kind of encounter a first for you?

It’s a first because of the unknown. We’ve dealt with things in the past. Several years ago we had that bombing where that guy set off those two car bombs, and we brought a lot of people from a lot of jurisdictions. It was a major deal and an investigation that lasted a few days. The problem with this one is the unknown. If they would have came to us and said, ‘This weekend 20,000 people are coming to Lincoln County,” well – then we deal with it. We need X amount of officers, we need X amount of fire, we need X amount of EMS. But we don’t know. 500 could be the number. Or 50,000. We just do not have a clue.

Is the FBI involved?

In the background. We are doing a slight coordination with them, but not as heavy as local and state law enforcement officers.

Do you feel there will be enough law enforcement and security to prevent something catastrophic from happening?

Anyone that answers that question and says they are prepared for everything and have enough law enforcement for anything is not telling the truth. I don’t think anybody – any law enforcement officer anywhere – can tell you, “We are going to make sure 100 percent nothing happens.” I wouldn’t be able to in my right mind sit here and tell you absolutely nothing will happen. I can tell you we’ll be there overwhelmingly. We’re going to make sure we prevent anything from happening we can that’s within our means. We’re going to be there in force. We’re going to be visible so people know we’re there.

Editor’s note: This interview has been edited for length and clarity.

A bountiful beauty: Exploring the little Caribbean island of Bequia in St Vincent and the Grenadines