Down in the dumps? You’ll spring back to life if you visit Tuscany’s balmy baths

By Jeremy Clarke For The Daily Mail

Five million litres a day of healing thermal spring water heated to 42c flow daily into the spa at Fonteverde in the beautiful Val d’Orcia area of southern Tuscany.

Only Karlsbad in Germany and Aix-les-Bains in France have a greater volume. So for three days I wandered about the place in my monogrammed bathrobe and slippers in a sort of hygienic trance, wondering if I’ll ever be quite this clean again.

More important, on arrival at Fonteverde I was at a low ebb, death having scythed a neat swathe through my family recently. Rising early on the first morning, however, I went for a hike with Marta, Fonteverde’s chief gym instructor.

Restorative: The thermal waters at Fonteverde in the beautiful Val d’Orcia area of southern Tuscany

Rudolph Valentino came from the Val d’Orcia and the local inhabitants have film-star looks. Perhaps it’s something in the water. Marta was no exception. She was a fan of Nordic Walking and strode erectly with her shoulders back and chest thrust out. I started to feel better already.

She led me briskly down a hill to a small Roman bath that was so well preserved it looked new. It was still in daily use. At one end of the pool sat a meek elderly couple, and at the other a dashing but loquacious village idiot, who pleaded with us to join him.

‘There are so many around here,’ said Marta. She was speaking about Roman remains, I think. Next, she led me briskly up the hill and showed me around the medieval village of Casciano dei Bagni.

My guest package at the Fonteverde Natural Spa Resort was a three-day Gentleman’s Journey. So I was surprised when on our return, they gave me the key to a 1982 rosso red Alfa Romeo Spider Duetto two-seater convertible.

They are trusting people at Fonteverde. Driving a Duetto was exhilarating, but like rowing a boat with one oar. It was hot work and in a quaint village I left the Duetto under a tree and went to look for a cup of Darjeeling. Returning to the car, I found a parking ticket on the windscreen.

My Gentleman’s Journey package included two spa treatments. The first was administered by Nina from the Ivory Coast.

She gave me tiny paper pants to wear, covered me back and front with slimy black mud then massaged it in. My body has seen better days and I felt obliged to apologise to Nina for this.

‘On the contrary,’ she said, ‘I was thinking how sportif it is.’ 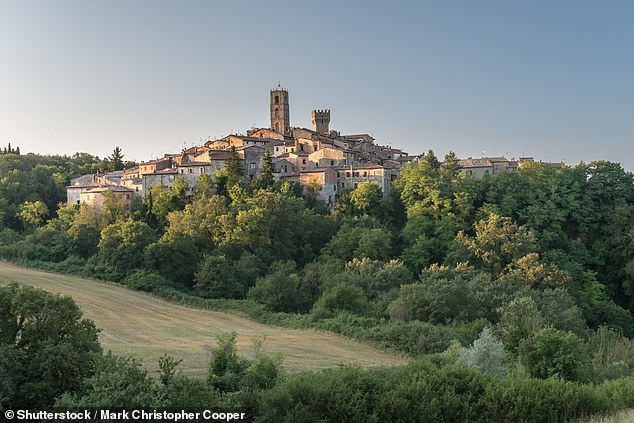 The medieval village of Casciano dei Bagni, which is located on a hill

I pondered on Nina’s poor taste in men’s bodies for the rest of my Gentleman’s Journey.

My other treatment was a facial. Warm oils were applied, then along came an electrical apparatus. It felt pleasant.

When I wasn’t hiking with Marta or covered in mud, I hopped dutifully from one thermal pool to another. Fonteverde has numerous hot pools and a lovely swimming pool, views by Botticelli.

Dogs and children have their own thermal bathing pools. But of the array of ‘wellbeing’ facilities available, the one I needed most, visited the most, and loved the most was the on-site 11th-century chapel of Santa Maria dei Balnea.

Built on the ruins of a 5th century BC pagan temple, you ask for the key at reception. It’s a foot long. Not once but twice I lost it, to the goggle-eyed consternation of the nice lady manning the desk.

The temple completed the renovation work effected by my time sitting in warm ponds and, when the moment came to leave, I felt almost chipper again.

Nightly rates at Fonteverde (fonteverdespa.com) start from £307 pp per night B&B, including access to spa and fitness facilities.

Tiny one-bed house that is just 3ft wide at its narrowest point goes on sale for £200,000